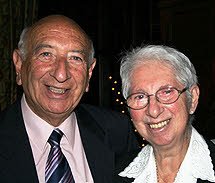 At last, pen to paper.  For some considerable time now I have wanted to write my husband’s testimony.

My husband, like myself, came from a Jewish background. Whereas I came from an Orthodox family he came from a secular one.  However, now we have both come to know the Lord Yeshua.

Way back in 1988 my husband, and our youngest son who was about 14 years of age, a bachelor cousin of mine and myself were on holiday in Sorrento, Italy. My husband had been sitting in the sun nearly all day and late in the afternoon he decided to have a swim.  He jumped into the pool not realizing it was not heated as the sun had moved from the pool, so the water was quite cold. Very tragically it caused him to have a heart attack, whereby he ended up in the hospital in Sorrento.

Now here is the exciting part of the story and the strange working of the Lord.  He was put in a room on his own – all that was in the room was a bed, a bedside cabinet and a very large crucifix on the wall.  He was not allowed to move from the bed and apart from myself, and I was only allowed to visit him for about 30 minutes a day, he had no one to talk to as all the staff spoke only Italian. 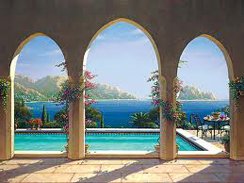 Suddenly after about the third day he said “I lay here all day looking at that crucifix and I think they have it right, not us.”  Thank the Lord he made a full recovery and after three weeks we came home.  All thoughts about the crucifix forgotten.

Then in 1998 the mother of a boy that I used to speak to outside the school while we waited for our children came to work at the same place as myself.  She said she was a Christian. One day she invited both of us to a BBQ at her Church. We were both very hesitant to go, thinking how would they respond to two Jewish people – anyway we did go and were truly made to feel most welcome. The Pastor invited us to attend the Alpha course which he was starting the following week. Much to our astonishment we both said, yes, we would like to go.

After a few lessons and reading the Bible all was made clear when we realized that Jesus was the Messiah, that He was there for us, our Saviour, our Lord.  In December 1999 we were both baptized.

While Ron and I have not embraced the ‘Catholic’ faith/teaching as such, God used the image of Christ’s death on the Cross, while confined to the bed of a hospital in a foreign-speaking country, slowly to plant in both our minds, the seed of truth about our Messiah’s death and resurrection.  And yet we were not looking for anything else to believe in; we were quite happy going along with what we were taught as children and not mentioning the name Jesus.

We are still amazed how the Lord worked in our lives. Now we know there is a greater love in life, an everlasting life in knowing Yeshua.