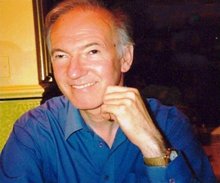 How could I look God in the face and ask for his forgiveness? If I’d had the answer to this, I may have been better able to cope with the events that were unfolding …

I suppose like many others born shortly after the war, from a very early age I have had a life of loss, rejection, insecurity and confusion: a lack of self worth, self esteem and self confidence.  All rolled up with a nice fat bundle of feelings of inferiority and, of course, guilt.  I lost both parents and was separated from my elder brother, and spent some time in a children’s home.  I’d been born with congenital cataracts, resulting in very poor eyesight in one eye and just light in the other.

However, I have also been incredibly fortunate throughout my life.  Despite all, at the age of five I went to live with a foster family who gave me a good home and kept me on the straight and narrow – at least, most of the time.  As a child I was constantly reminded that it wasn’t a permanent situation, so I knew what could happen if I didn’t behave – back to the children’s home. They showed me generally good standards to live by, with lots of good, but also some rather non-Christian, examples.

In the great scheme of things, and in the circumstances, I have been extraordinarily fortunate. However, it has been a difficult and at times a very painful journey, carrying lots of baggage around for many years.

There is too much to tell it all here; however, I will mention the planned arrival of our first baby.  I was deliriously happy, so happy that I could hardly contain myself and was frequently reduced to tears of joy – at last my own real family.  So you can imagine how I felt when, at 12 days overdue, she suddenly, and unexplainably, died.  She was so perfect, and I cannot describe the sheer heartbreak which can still make me cry, even twenty years later.

It was four very, very long, painful and damaging years before her lovely sister came along – the light my life.

Had someone asked me a year ago if I were a Christian, I would have said “Yes, I don’t go to church very often but, yes, I live a Christian life”.  Apart from my little weaknesses and minor sins – the odd swear word, the odd fib, inappropriate thoughts, sometimes too many glasses of wine … Oh yes – and the major sins which really messed up my life.  These destroyed my marriage, my self respect, personal integrity and the vows I had made before God – the weaknesses and sins which cast me adrift from what I had always believed in; my own honest values.

I’d known all along that what I was doing was wrong and I hated doing it, but felt I couldn’t resist – I didn’t want to resist.  Life owed me this bit of happiness and excitement!  But what followed was years of guilt and self punishment.

I found a wonderful counsellor who helped me to understand and come to terms with what had gone before.  She helped me to understand that I could forgive myself and others, that I was only human, that there comes a time when we just have to accept what we have done, make amends as best we can and move on.  She made such a difference to my life.  I even began to quite like myself and regain some self respect!  I was then happier and more content with myself than I had ever been.  I had reached a place I could never have imagined.

However, there was one question we hadn’t tackled – or even discussed – during the counselling:  How could I look God in the face and ask for his forgiveness?  If I’d had the answer to this, I may have been better able to cope with the events that were unfolding … 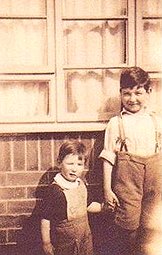 In 2007, my beloved brother (see photo) developed a tumour at the base of his spine.  It was successfully removed, and we were all so ecstatically happy when, after six months, he appeared to have regained his health.  In the meantime, my foster sister’s cancer had spread, and it was clear that she had not long to live.  Only weeks later, my brother was diagnosed with a brain tumour; doctors gave him between one and six weeks to live.

My foster sister died on my brother’s birthday; my brother died exactly one month later.  My sister died with enormous courage and dignity; but my poor brother was so frightened of dying.   He told me several times that he was terrified; and I cannot tell you how distressing that was for both of us.

We had grown up with different foster families, but remained in contact for almost all our lives.  I loved my brother very much – there were times when he was my father, my mother as well as my brother. During those final weeks, we were able to talk to each other and to say good bye.  There had been many times when I had wished I could exchange places with him.

I had felt so helpless and I was unable to find the words to help him seek guidance and give himself to God.  I felt I had let him down when he most needed me.  That was three years ago.

Since then my life has changed beyond all recognition, and during this past year I have come into contact with a number of other people who were approaching death.  When one man was invited to attend a short service in the chapel, he declined, saying he had not really been a believer, and would feel hypocritical.  I tried to persuade him that it was never too late to seek God’s love, but without success.  I felt so frustrated again, that I didn’t have the knowledge and the words to convince him otherwise.  There have been other incidents since where I have found myself praying for and trying to convince people that God will listen, that God will forgive and will be there for them if only they would trust and give themselves to him.

I have also found myself with others who have experienced serious and distressing crises in their lives and I am finding an ever strengthening conviction and wish to encourage them to reach out for God’s help.

I have my friend to thank for leading me to The Bridge, where I have learned more in a matter of months, than I have learned in the rest of my 62 years.

I have been overwhelmed by the welcome and fellowship of the congregation, and I give thanks to God for leading me here and for the wonderful teaching and way in which they give praise to the Lord.  It is wonderful !

However, what is also wonderful is that all this – and so much more – has given me the surety of my own belief.  I have been able to ask, and have received, God’s forgiveness for my past sins through His Son, Jesus Christ, the Messiah, whom I believe lived and died for me.  I chose to testify to this change in my life by being baptised.

I pray that I will gain the understanding, wisdom and knowledge of God, in order to point others towards Jesus, and to help comfort those I know and love, and those I meet along the way.